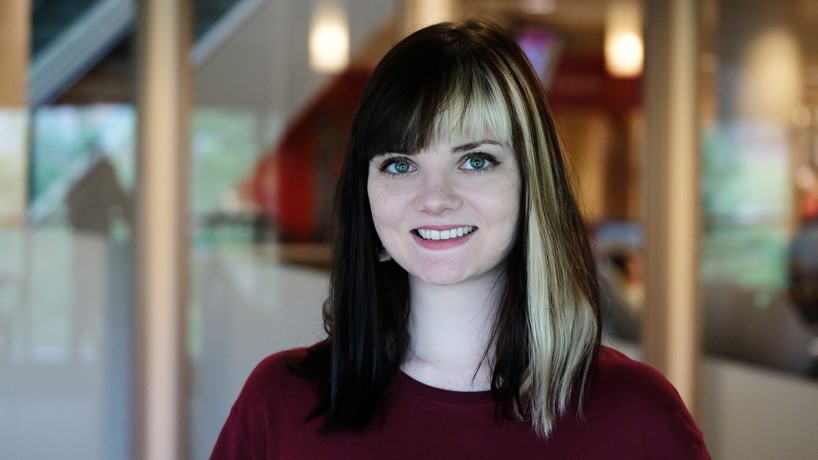 Kristy Gammill’s passion for both learning new things and using her Japanese language skills shine through in the work she does. The UMSL alum graduated with her Bachelor’s Degree in Japanese a year ago, and she also has a Level N2 Certification with the Japanese Language Proficiency Test. She first considered working for Nidec Motor Corporation (NMC) through her work with the Japan America Society of St. Louis (JASSTL), where she served as a student assistant.

At that point, Kristy was considering an option that had been calling to her for years: joining the JET Programme, which would have put her working in Japan as a translator and interpreter right after she graduated. But Kristy also found herself drawn to a new option thanks to NMC’s Vice President of Business Planning and Development, Greg Gorman, who she worked with in his position as a JASSTL board member. This new option would offer her the chance to use her existing skills and provide the opportunity to learn an entirely new skillset and gain an immersive business education.

She joined NMC in June 2017 as a Business Coordinator, working closely with the Business Development executive team and Japanese Administration. She says that it was a big jump for her to go from the nonprofit side of things to the corporate world. “It came out of left field, especially because I’d been planning on applying to the JET Programme for years and years, but this ended up being the right decision for me, and I’ve never regretted it.”

According to Kristy, NMC was already on her radar as a strong company with an equally strong presence in the St. Louis area because of the many UMSL activities it sponsors. This familiarity with NMC’s reputation as a global, multi-billion-dollar company helped her when she was considering which job offer to accept: the more familiar role that she’d been considering for years or the new and exciting opportunity that would push her outside her comfort zone.

“When it actually came time to seriously consider working here, what really motivated me to accept the offer was the idea of learning new skillsets. Previously I had been getting ready for a job that was nothing but what I’d been studying all along. And now I was getting ready to do something that would allow me to use a little of my Japanese language skills but would also require a lot of other things.”

Kristy believes that NMC provides a great mix of youthful energy and enthusiasm paired with a lot of wisdom and experience. “I think that we have a lot of motivated people that you can learn from, and that’s my favorite part. Everybody has been so patient and willing to teach—and it’s not just with me, I see it with other employees. And that sort of accessibility and friendliness and willingness to both learn and teach is definitely one of the things I like most about working at Nidec.”

She also values the excellent opportunities for professional development and career growth offered by the company. One example she gives of this in action involved several executives taking time out of their busy schedules to watch a research presentation she was giving on a topic that was new to her.

“They were all so patient and engaging. They gave me guidance on where else to go with my research, and I felt like they really cared about my professional development and my project even though I’m at one of the bottom rungs of the ladder. A lot of corporations that have a lot of hierarchy, there’s so much that the people at the top miss about the day-to-day workings. But I think that the executive leadership here is really committed to learning about the day-to-day work and that’s something I really like about Nidec.”

What Kristy most enjoys about her own day-to-day work at Nidec is engaging with an international team. “So often I’m interacting with people in Italy or France or Japan, and I think that’s what’s most exciting to me. To feel like I’m really involved with the company as a whole. And to work with these different countries is really wonderful.”

That ties in to the advice she would give to people considering employment with Nidec or just about to start with the company. “Get your notepad out. I think that there’s so much learning to be done. Even the parts of the job that I thought I would feel familiar with, I have so many questions and so many things to learn all the time. And that’s a big positive for me. I think this is a company where you’re really challenged to learn and to grow, and so I would just say get ready to get moving, to pick up that phone, to take notes.”