CTOPCServer is an OPC-compliant server which allows PCs to communicate with Control Techniques drives.

The server supports communication using Ethernet, CTNet, RS485 and USB. OPC is a standard interface on SCADA packages and is widely supported within Microsoft® products. 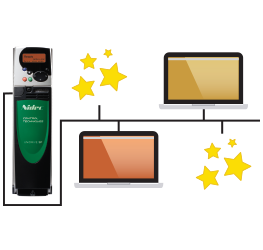 For an industrial application running a modern SCADA system or a VB application we recommend a major brand name system certified for Windows NT, 2000 or XP (Windows 9X systems are not supported) from the office or industrial sectors with the following specifications: